To share your memory on the wall of Catherine Abboubi, sign in using one of the following options:

Catherine (Cathy) Anne Abboubi passed away in Morristown, NJ on December 30, 2020 at the age of 71, due to complications with pancreatic cancer. She was born ... Read More
Catherine Anne Duchensky Abboubi

Catherine (Cathy) Anne Abboubi passed away in Morristown, NJ on December 30, 2020 at the age of 71, due to complications with pancreatic cancer. She was born in Montclair, NJ to Michael and Antoinette (Sena) Duchensky on January 6, 1949.

A long time resident of Montclair and then Glen Ridge, Cathy was a graduate of Montclair High School in 1966 and also Montclair State University in 1970 with a bachelor’s degree in English. She was employed as a Technical Writer for Intel, Dialogic and Rapidata and was a member of the Society for Technical Communications organization, New York Metro Chapter.

An avid and adventurous traveler, Cathy had visited 114 countries according to the rules set up by the Traveler's Century Club. She had vacationed in countries from Abu Dhabi to Zimbabwe, visiting many countries multiple times. Her favorite continent was Africa and her favorite vacation spots were Florence, Italy and Istanbul, Turkey. Her love of travel started with a subscription to National Geographic Magazine from her aunt, Anna Duchensky, when she was a child. Her first adventure was a trip to Ukraine, visiting relatives with her aunt, stopping off in Russia, Greece and Italy before returning home. She had an extensive collection of African art. Her last trip before being diagnosed with pancreatic cancer in November 2018 was a gorilla trek to Uganda with her brother, Michael Duchensky. A favorite "siblings trip" was to the province of Alberta, Canada visiting Calgary, Edmonton, the Canadian Rockies and many of the Alberta Big Statues, including the World's Largest Pierogi and World's Largest Kielbasi in the little villages in the north of the province celebrating their Ukrainian heritage.

She also loved sports and successfully predicted the New York Mets World Series Championship in 1969 at the start of the season. She was looking forward to an exciting season of basketball with the Brooklyn Nets and enjoyed endless football games on Sundays. She loved completing the NY Times crossword puzzle.

Cathy was predeceased by her daughter, Samira Abboubi Dewes. She is survived by her sister Donna Grant (Anthony) of Newton, NJ and brother Michael Duchensky of New York City. She also leaves behind two nieces, Chelsea Campanile (Nicholas) and Laura Szymczak (Nicholas) and a great nephew Nicholas Campanile.
Read Less

To plant a memorial tree in honor of Catherine Abboubi, please visit our Heartfelt Sympathies Store.

There are no events scheduled. You can still show your support by sending flowers directly to the family, or planting a memorial tree in memory of Catherine Abboubi.
Plant a Tree

We encourage you to share your most beloved memories of Catherine here, so that the family and other loved ones can always see it. You can upload cherished photographs, or share your favorite stories, and can even comment on those shared by others.

Posted Jan 03, 2021 at 01:44pm
We are so sorry to hear of Cathy's passing and send your family our thoughts and prayers. We have some cherrished memories growing up as neighbors. 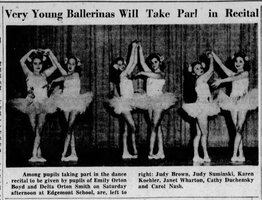