To share your memory on the wall of Joanne Egan, sign in using one of the following options:

Print
Joanne Egan, loving mother, grandmother and partner, and local resident and businesswoman, passed away peacefully on February 9, 2021 in North Palm Beach, FL at the age of 77.

Joanne was born on May 12th 1943 in Passaic, NJ, the daughter... Read More
Joanne Egan, loving mother, grandmother and partner, and local resident and businesswoman, passed away peacefully on February 9, 2021 in North Palm Beach, FL at the age of 77.

Joanne was born on May 12th 1943 in Passaic, NJ, the daughter of Lena (Corsano) and Fred Liberti. She was raised in Elmwood Park, NJ, and attended East Paterson High School, and then continued her education graduating from Montclair State College in 1964. It was during this time that she met her previous husband, Cornelius Egan.

A teacher after college and living in Montclair, NJ, Joanne had penchants for helping people and Tudor architecture, which led her to her life career, the business of Real Estate. She eagerly attained her Broker’s License, and in 1979 started her own Real Estate brokerage, “Joanne Egan Associates,” a business that was consistently a top performer in its local market. Highly respected amongst her peers, Joanne became a recognized leader who took on several industry governing roles which included President of the Montclair Board of Realtors. She made many dear friends through her business, and it was during this time she met the gentleman with whom she would ultimately spend the rest of her life, Raymond Kirkeby.

Outside of her truly remarkable professional life, Joanne was a loving and devoted mother, and doting, spoiling grandmother. “Grandma Cookie” cherished spending time with her family at her beloved home in Glen Ridge, NJ. She attended countless baseball, football and hockey games, recitals and performances. She also loved the ocean and vacationing with her family, and she enjoyed several special, unforgettable trips with her kids and grandkids over the years.

Joanne and Raymond both retired and began spending more time at their winter home in North Palm Beach, where they enjoyed going to the beach and pool, watching the boats go by, playing Scrabble, and going out for great meals.


To celebrate Joanne’s beautiful, amazing life, a Memorial Service will be held on Saturday, February 20th, 2021 at the Caggiano Memorial Home, 62 Grove Street, Montclair, NJ 07042 from 1 o’clock to 4 o’clock p.m. In lieu of flowers, contributions may be sent in Joanne’s name to CurePSP (PSP.org).
Read Less

To plant a memorial tree in honor of Joanne Egan, please visit our Heartfelt Sympathies Store.

We encourage you to share your most beloved memories of Joanne here, so that the family and other loved ones can always see it. You can upload cherished photographs, or share your favorite stories, and can even comment on those shared by others.

Although it has been many years since I last your mother, my memories of her are vivid. She was at Montclair State when my late wife, Kathy Roth Kennedy, was there. She was dating Connie then, and Connie and I were touch football teammates.

Then, of course, the Kennedys and Egans were Glen Residents. with our boys becoming baseball teammates. Some super memories come from those days.

Your mother had a great and productive life, which I feel confident has rolled over to your lives as adults.

Ray, Tammi, Al, Jeff, Sandy, Scott, Please accept my sincere condolences. Cookie was a very special lady who did a lot and meant a lot to many people. Always remember the special, happy memories she has left each of you. Here are a few I remember. Love to all, "Cousin" Vinnie 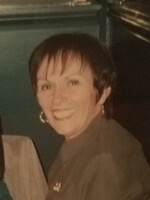