To share your memory on the wall of Margaret Harris, sign in using one of the following options:


A virtual memorial service will be held via Zoom on April 3 at 4:30 p.m. EDT


A virtual memorial service will be held via Zoom on April 3 at 4:30 p.m. EDT


Mrs Harris was born on October 25, 1944 and attended Montclair public schools. She graduated from Montclair High School in 1962.


She joined the Montclair Congregation of Jehovah’s Witnesses as a teenager and was an active, dedicated member throughout her life. She met her husband of more than 30 years, Calvin Harris, through the congregation. They were married on August 22, 1970. Mr. Harris died in 2001.


Mrs. Harris was a licensed notary and also trained in tax preparation. Her business, Harris Secretarial, was located on Glenridge Avenue in Montclair for several years during the 1980s. After selling the business she continued to work in tax preparation and other office-management roles on a freelance basis.


She is survived by her sister, Phyllis Beth Welsh, and was predeceased by her sister Coral Agnes Davis, and brothers Thomas Ira, Paul Dennis and William Norton Perren.
Read Less

To plant a memorial tree in honor of Margaret Harris, please visit our Heartfelt Sympathies Store.

We encourage you to share your most beloved memories of Margaret here, so that the family and other loved ones can always see it. You can upload cherished photographs, or share your favorite stories, and can even comment on those shared by others.

Posted Mar 24, 2021 at 02:54pm
With deepest sympathy, to my family. I loved Aunt Ruth and always knew she was my dad's favorite.
she would bring him to check on me as he I'm sure asked. My fondest memories is of Aunt Ruth playing her
guitar hoping that i would one day she would teach me. Gone to be with her husband, parents, and sibling.
No longer needed here, a great person whom i never knew we had so much in common. 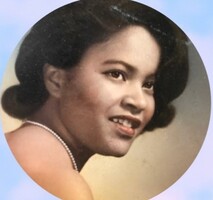