To share your memory on the wall of Joseph LaRiccia Jr., sign in using one of the following options:

Provide comfort for the family by sending flowers or planting a tree in memory of Joseph LaRiccia Jr.

Provide comfort for the family by sending flowers or planting a tree in memory of Joseph LaRiccia Jr.

Print
Joseph C. LaRiccia, Jr. passed away peacefully on March 16 at the age of 83

﻿Joseph C. LaRiccia, Jr., passed away peacefully on March 16th at the age of 83, surrounded by his loving family. Joe was born on January 20, 1938, in Montclair, New Jersey, and was a proud Mountie, playing football for Montclair High School before graduating in 1956. After high school, he earned a degree from Newark Vo-Tech School, before going on to proudly serve his country in the New Jersey National Guard for eight years. He then owned and operated Joseph LaRiccia Plumbing and Heating for 34 years before becoming a plumbing inspector for the townships of Maplewood, Millburn, South Orange, Short Hills, Verona, and West Caldwell. He later served as the assistant building inspector in the Township of Maplewood and the Treasurer of the Essex County Inspectors Association.

Joe enjoyed life to the fullest. He was an avid fisherman, fly fisherman, and woodworker, and he loved spending his time with his family at Via Vita, his country home in Pennsylvania. He will be immensely missed by his family, friends, colleagues, and all those whose lives he touched.


He was predeceased by his mother, Grace LaRiccia-Marano, father, Joseph C. LaRiccia, his brothers Nicholas and Leonard.

Viewing will be held at Caggiano Memorial Home,62 Grove Street, Montclair 3:00 pm to 7:00 pm on Friday, March 19th. A funeral mass will be held on March 20th at Our Lady of the Blessed Sacrament, Roseland, N.J. at 10:30am. The entombment will be at Immaculate Conception Cemetery .In lieu of flowers, please send donations to the Saint Joseph’s Indian School at stjo.org/flowers P.O. Box 100, Chamberlain, SD 57325.
Read Less

We encourage you to share your most beloved memories of Joseph here, so that the family and other loved ones can always see it. You can upload cherished photographs, or share your favorite stories, and can even comment on those shared by others.

Posted Mar 18, 2021 at 03:39pm
The Vitta Family sends their heartfelt sympathies to all of you. He is with the Angels in Paradise and he will always be with you as well. May he Rest In Peace. You will all meet again
Love
The Vitta Family
Comment Share
Share via:
BD

We are so very sorry for your loss. Our thoughts and prayers are with you and your family.
Sincerely,
Barb and Casey Dunn
Comment Share
Share via:
JF

Posted Mar 17, 2021 at 12:17pm
On behalf of the New Jersey Building Officials Association, I would like to express our sincerest condolences to the LaRiccia family. Joe was a great person and friend to our organization and he will be sadly missed.

Posted Mar 17, 2021 at 09:04am
Please accept our sympathy and condolences. I met Mr. LaRiccia in 1980 and from that day forward always felt part of the family. Thinking of the entire family during these day's.

Posted Mar 16, 2021 at 06:36pm
Dear Isabelle, We are deeply sorry about the passing of your beloved Joe. We will continue to keep you & the family in our thoughts & prayers. 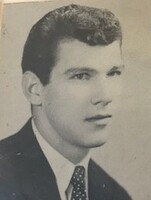