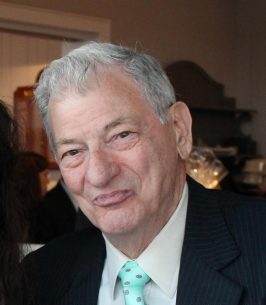 John C. Conti, Sr., 90, of Upper Montclair, NJ, entered eternal rest on Wednesday, November 9, 2022. At the time of his death, John was receiving outstanding care at The Chelsea at Clifton and Grace Hospice. John’s family is grateful to the dedicated healthcare professionals who eased his burden during his final days.
John was born at home in Little Falls, NJ, on June 7, 1932 to Alfonso and Edna (nee Fairrock). He attended Passaic Valley High School before joining the 213th Armored Infantry Battalion, NJ National Guard, at the tender age of 15. John joined the 161st Military Police Battalion of the United States Air Force in 1952. He later joined the 1094th Air Police Squadron at Manzano AFB in New Mexico, a top-secret base at the time. He was also stationed at Luke AFB in Arizona for a short time. John’s rank was Airman First Class. In his position as a military police officer, MP, John captured an airman attempting to go AWOL. The reward for his valor was to accompany General Curtis LeMay, a future Chairman of the Joint Chiefs of Staff, to Nevada where he observed an atomic bomb explosion from a frightfully short distance of only six miles.
While in the Air Force, John finished his high school education. Upon completing his military service in 1956, John returned to Montclair with his wife, Mary, and their two children. John initially worked for John Blondel and Son, delivering fuel oil while he completed his Associate’s degree in tool design, mathematics and drafting in 1960. After working for Curtis-Wright and GMI as a machinist, John began his own tool & die business. The project of which he seemed most proud was the fabrication of a Teflon weather satellite he built for NASA. John then turned his entrepreneurial energy to merchandise vending, and the founding of Conti Vending Service in 1968. John was active in the Automatic Merchandising Council of New Jersey (AMCNJ) and served as President of the AMCNJ from 1990 to 1992. He received recognition as the trade association’s Person of the Year in 1993.
John was a member of the Clifton Masonic Lodge, the Shriners of Livingston, and served as the Treasurer of the Montclair Lacrosse Club. In his free time, John enjoyed playing golf, making wine, attending his grandchildren’s athletic events and performances, and dancing at each of their weddings.
John was happily married to his loving and devoted wife, Mary L. Conti (nee Fortunato) who predeceased him in August of 2014. He is survived by his daughter, Marielena (Elaine) Spagnuolo and her husband, William, of Bloomfield, NJ, his son, John C. Conti, Jr. and his wife, Elaine Pantages Conti, of Mantoloking, NJ. He leaves six loving grandchildren: Michael, William, Jennifer, Joseph, Rebecca, and Allison, as well as five great grandchildren: Emilia, Remy, Juliet, William, and Oliver. John was predeceased by his three siblings, Chip, of Wyckoff, Dan, of Clifton, and Mary, of Toms River.
Visitation will be on Sunday, November 27th from 2:00 p.m. to 5:00 p.m. at the Caggiano Memorial Home, 62 Grove Street, Montclair, NJ. A private, family only Mass will be held on Monday, November 28th at 10:00 a.m., Our Lady of Mount Carmel Oratory, 94 Pine Street, Montclair, NJ.
In lieu of flowers, gifts in John’s memory may be made to Our Lady of Mount Carmel Oratory, where John and Mary were married, and his father-in-law, Angelo Fortunato helped to build.